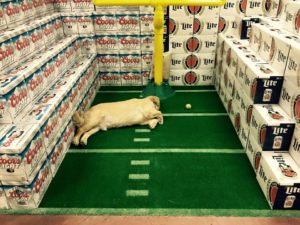 Whether you’re a complex beer aficionado or a simple lager drinker, Tri-State liquor has you covered. We carry a wide variety of lagers, pale ales, IPAs, Belgian beers, pilsners, stouts, microbrews and craft beers. We keep abreast of ‘beer chatter’ and do our best to offer our customers some of the latest up-and-coming favorites in the beer world.

Beer is one of the oldest beverages on our planet dating back to at least 5000 BC and during the Industrial Revolution, beer moved from artisan manufacturing to industrial. The evolutionary development of tools allowed for more control in the brewing process. Today, beer making is a global business with several dominant multinational companies and thousands of smaller producers ranging from brewpubs to local breweries.

This allows for a lot of choices and a lot of debate about which types are the best. All we can tell you at Tri-State is that we like all kinds of beer, from the simplest to the most complex. Stop by and check out our inventory and if there is something you’d like to see us carry, let us know.

New to beer drinking? Here is a quick synopsis of some of the more common styles of beer:

Lager – Been around for a few hundred years and made accidently from yeast strains. Lagers are fermented (like wine) and served at cooler temperatures, limiting the formation of esters and other by-products, and making for a clean flavor. Lagers are the most popular big-brewery beers in the U.S.

American Pale Ale — Higher than normal hop bitterness, flavor and aroma. Hops can be on the coarse side. No traces of buttery diacetyl and minimal fruity esters. Alcohol content not exceeding 5.5%

Indian Pale Ale (IPA) — Originates from England in 1774 when the British Empire began heavy trading with India. IPA was born from English pale ales as a result of a need to stabilize the beer for shipping. Two methods were used; heavily hop the beer and reduce the gravity (sugar) by using yeast to create a product with less residual sugars. Today, India Pale Ales can be found all over the world with varying degrees of hop, malt and alcohol levels.

Belgian Beers — typically top-fermenting ales that contain yeast sediment (desired and undesired, regulated by careful pouring). Some have blends of many types of yeast, or even blends of young and old ale. Often created using spontaneous, natural fermentation. The uniqueness of this diverse regional yeast is what imparts much of the Belgian flavor and aromas. They are unlike any other in the world.

Pilsner — The birthplace of Pilsner is the ancient city of Plzen (or Pilsen) which is situated in the western half of the Czech Republic in what was once Czechoslovakia and previously part of the of Bohemian kingdom. Traditional Pilsners are typically around the 4 to 5% alcohol. Light in color, Hops are very prevalent usually with a spicy bitterness and or floral flavor and aroma. Smooth and crisp with a clean malty palate, some of the originals will show some archaic yeast characteristics similar to very mild buttery or fusel (rose like alcohol) flavors.

Stout — There are many variations; some are dry and some are sweet, some hoppy and some alcoholic. All have that common characteristic of a roasted flavor that sets them apart from any other style, usually due to the use of roasted barley, un-malted, but rather highly kilned unique flavors ranging from bitter unsweetened chocolate to coffee, to a dry grain astringency.

Microbrew – A microbrew is a beer brewed in a small commercial brewery that produces no more than 1,500 barrels of beer per year. Some of these are also designated craft beer and emphasis is placed on quality of product rather than mass production. The use of specialty malt and hop ingredients creates for a variety of aroma and flavor allowing these beers a more complex flavor than typical American light lagers.

Find out More at Beer Advocate